Hi there this is Rohit and in this article, we talk about Realme 6 and I’m actually excited about this device yes finally we are seeing some very impressive specs for a budget-related does smartphone.

If we recall the pricing of the Realme 5 if it was a budget-oriented phone so I have very high expectations with this one but I doubt it will be apprised as aggressively as the Realme 5 because it has some specs that we have simply not seen in budget range phone Realme 6 price start at Rs 12,999. 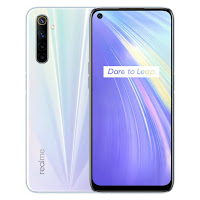 In fact, we are seeing much more premium smartphones so anyways here as you can see it says that it has a 90 Hertz display so that’s actually very interesting and a 30 watt fast charging that’s vogue charging and it has a 64-megapixel quad rear-facing camera.

I mean these specs we generally don’t find on the budget smartphone so how about you very curious to see how do they price this one that’ll be interesting and it comes and what do you say 4 gigabytes 6 gigabytes and 8 gigabytes of RAM.

Higher variant come in 8 gigabytes the higher-end one and storage will be 64 or 128 gigabytes so let’s quickly see and I believe the price is aggressively this is going to change the budget smartphone market.

Realme 6 and we have a phone case and a sim ejector – so nice that we are giving a case they haven’t scrimped on that so you’re getting a case and here Comet White and Comet Blue color we have right a light reflects this is not glass guys it’s a polycarbonate but looks like glass.

Here we have a sport 6.5 inches display and physical overview first guys again yeah the back is that plastic polycarbonate top we have actually nothing and on this end, we have the power on/off button and the fingerprint scanner is also embedded in this one.

In fact, if you remember the Poco X2 hat similar setup so it’s like that whatever will be the main speaker USB Type-C port main microphone and the 3.5 mm headphone jack and the volume rockers are over here and here we have the SIM tray.

Now let’s see the configuration what do we actually get and we do have a dedicated microSD card slot so that’s actually nice but as the base variant will come at 64GB of internal storage.

This Realme 6 is having a 6.5-inch full HD plus screen with a 90 Hertz display it’s protected by Gorilla Glass 3, it is part by the Mediatek Helio G90T chipset which is octa-core chipset it comes in 4 6 and 8 gigabytes of ram, storage will be 64GB or 128GB and it’s UFS 2.1 storage.

And it also has a 4,300mAh power battery with 30-watt fast charging so guys, this comes with the new Realme UI OS, so some of the apps are junk and you can uninstall the junk so that’s actually nice as you can see quite a bit of chunk is there.

But I like this new UI you have some quick toggles over here and this is IPS great screen and I like the fact that they still can provide this punch-hole camera in this price range so that’s actually nice and let’s go to the display the big thing is they are giving this 90 Hertz display on this.

And you can set it to 90 Hertz if you want so that’s actually nice or you can just keep it to auto if you want the default is 60 Hertz so nice to see that option is there and this is coming with the Mediatek G90T chipset.

And guys and the Realme and Redmi note 8 Pro had it and this is a great chipset for gaming any game you throw on it you can play at very high setting so I’m glad to see that they are using that chipset and if you just go back go to about the phone as you can see it’s running out of the box with Android 10.

So you don’t have to worry about that and Realme a UI version 1 and this is the higher end of Union that comes with 128 gigabytes and here get about 114 gigabytes out of that.

So that is regarding the storage that you’ll get so this is the typical new Realme UI that you are getting lot cleaner I would say compared to the other ones and the sound looks like it’s the speaker is loud you also get the digital will being option over here.

And yeah you can’t expect tears because at this price range Realme 6, so that’s nice and the handset feels actually nice the back is that polycarbonate plastic though it looks like glass if you look at like this and I am assuming most of you will use it like this with the supplied case.

So this is how the device will look with the supplied case let’s also look at the fingerprint scanner because we have actually put it on the side over here so this is actually a button also it’s more the power on/off and if I press as you can see unlocks so it’s a very fast action a fast fingerprint scanner.

So it just feels like these are just pressing the power on/off button right and unlocks and it works, for example, I haven’t scanned this one and I just say it won’t unlock so yeah this is one eye scan and it works so that’s nice and also you can put the face unlocking option if you want now.

Let’s talk about the Realme 6 camera on this one because this one is actually having that 64 megapixel Samsung sensor that we have seen earlier also and let’s see and the Reamle similar to other Realme phones they haven’t changed this one this is the panorama and notice guys how fast it’s doing it there’s no hint of any lack 5x option is there again.

This is digital zoom guys as you can see 1X and 2X and it’s storing the photographs really quickly and that is because what is an Helio G90T chipset is actually really fast and this also comes with the UFS 2.1 storage.

Let’s go to the port frame or and yes in real-time I can see the background blur as we also have dedicated 64 megapixels more and more if you go we also have the pro mode so if you want manual stuff you can do that.

And you’ll also I tried macro because it has a macro lens also yes as I can go really close to the object with this macro mode so that’s nice but let’s just look at the front-facing camera and notice that you get this animation over here that’s the front-facing by default it has the beauty mode enable so again disable it guys otherwise it will look weird and of course, Realme 6 it’ll have the portrait.

And here also again I’m out of smoothing that it does by default so with this one so that you have a better idea so these with the rear-facing camera and as you can see as expected the 64-megapixel camera does actually a pretty good job this was.

So, guys, that’s it for now for the overview and first look at this real mean sick smartphone certainly from the specs point of view it’s a power-packed phone I simply didn’t expect that we will get this high specs in this budget price range.

So what do you guys think about this Realme 6 do let me know in the comment section below and guys if you guys liked this article don’t forget to share!!!

More than 2,500 mobile games were removed from Apple's China app store in the first week of July, four times as many in the...
Read more

Gaming hardware maker Razer plans to dispense its locally produced masks in Singapore through a network of vending machines across the city-state, where it...
Read more

Batgirl might be a part of the next game from Batman: Arkham Origins developer WB Games Montréal, if Internet sleuths are to be trusted....
Read more