The Last of Us 2 is out on June 19. Before you dive into the game, read our review to know what to expect. Released seven years ago this month, The Last of Us — the award-winning survival horror game from Sony-owned Naughty Dog, written and directed by Neil Druckmann — was one of the last major exclusives built for the PlayStation 3. The Last of Us capped a terrific run for Sony’s previous-generation console. Its highly-anticipated, long-in-the-making sequel The Last of Us Part II — also from Druckmann, with Halley Wegryn Gross (Westworld) as co-writer — is now in a similar place, with the PlayStation 4 about to be superseded by the PlayStation 5 in late 2020. With the PS4 at the end of its lifecycle, it’s also why loading a Last of Us 2 save game takes up to a minute.

That’s a tall task to live up to. Thankfully, The Last of Us 2 is more than up for that challenge. It builds off the much-acclaimed story from the original and expands on previously-established themes, most of them stemming from the cycle of violence that keeps repeating. That includes familial bonds, religious intolerance, and fanaticism, and confusing revenge with justice. Through it, The Last of Us 2 subverts expectations and forces you to reckon with the actions of the characters you’ve come to feel for. In some ways, it’s similar to Black Panther. Except here, it also circles back to the zombie genre allegory of humans always being more terrible, even in a post-apocalyptic world. Humans make their own choices, the zombies can’t.

Those are weighty topics to deal with and so The Last of Us 2 is as gloomy, depressing, and morbid as its predecessor, because of the atmosphere, setting, and Gustavo Santaolalla’s background score. It’s made more so by since you’re playing a post-pandemic tale in a pandemic-gripped world. Add to that the violence and gore of its combat, with every kill etched across the characters’ faces, which twitch and grunt as they grapple with the things they must do to survive. The fact that you’re actively participating makes it a lot more uncomfortable than watching someone do it in a movie. The Last of Us 2 does intersperse these with some lighter moments, but they are so few and far between that you’d want to take breaks and munch on something lighter.

The Last of Us 2 opens around the time the original ended, with Joel (voiced by Troy Baker) telling his brother Tommy (Jeffrey Pierce) the truth about what happened at the hospital towards the end of the first game, the truth he hid from Ellie (Ashley Johnson). Soon after, Joel visits Ellie at her new home inside the settlement in Jackson, Wyoming. There seems to be a distance and coldness between the two, possibly brought on by their final conversation in The Last of Us, but that thaws after Joel presents Ellie with a guitar and plays Pearl Jam’s “Future Days”, simultaneously fulfilling the promise Ellie asked of him in the first game and foreshadowing the events of The Last of Us 2.

On a morning five years later, Ellie is woken up by her new friend Jesse (Stephen Chang). Their exchange reveals that Ellie kissed Jesse’s ex-girlfriend Dina (Shannon Woodward) the night before, which brings the confirmation of her sexuality into the main game, having been introduced in the prequel expansion The Last of Us: Last Behind. Ellie and Dina set off on a routine patrol mission outside the Jackson settlement, but it winds up being a lot more after they learn of some bad news. That ultimately gets the characters to Seattle, Washington, which is where most of the action takes place in The Last of Us 2, involving a militia known as the Washington Liberation Front and a Christian cult called Seraphites.

The devastated, overgrown city of Seattle brings a semblance of open world to The Last of Us 2, something that was missing from the first game. Armed with a map, you can roam around and find new places to investigate, which will grant you additional supplies or help you progress in your main quest. Most of it is optional, though. At times, The Last of Us 2 offers the opportunity to play with other characters, but we can’t say more because Sony has forbidden critics from discussing specifics. And since the central story is more concentrated in time than before, The Last of Us 2 deepens the experience by the use of flashbacks, which are also the gateway to its happier sections. 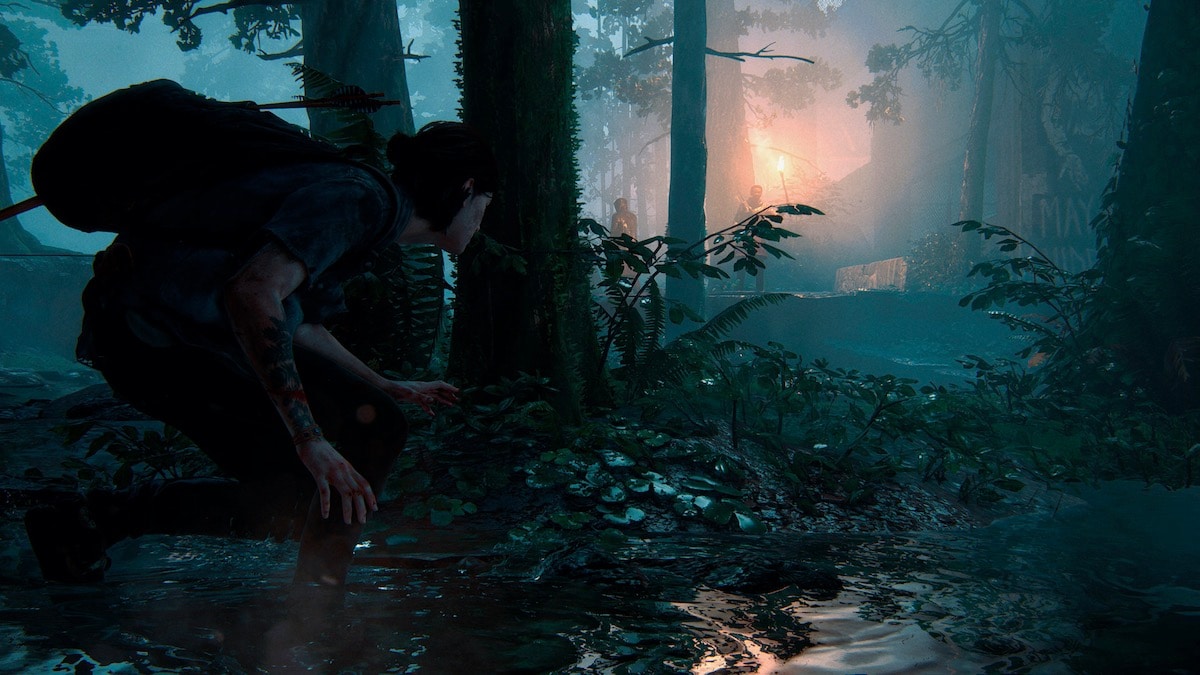 Ellie crouching to conceal her movements in The Last of Us 2
Photo Credit: Naughty Dog/Sony

In terms of gameplay, it’s a bit ridiculous — though, sadly, typical of games with a skill tree — that The Last of Us 2 wants you to relearn certain skill sets, given (at least one of) the characters had already done so in the previous game. Thankfully, The Last of Us 2 does expand on abilities available from the start. You can now lie prone for added stealth. You can dodge enemy melee attacks. You can now climb and swing on ropes. And the upgrades — new and old — are divided across branches, including “Survival” (Listen Mode speed, health kits), “Crafting” (melee upgrades, smoke bombs), and “Stealth” (silencers, prone speed). And of course, you can still do everything from the original, be it riding horses or pitting zombies and humans against each other.

Stealth has been improved as a mechanic on The Last of Us 2, partly thanks to the introduction of prone. While crouching helps you hide in tall grass, you’ll need to go prone to do the same for short grass. You can also crawl under vehicles and objects to keep your cover. The sound design and score, which hangs over the game ominously, also works as a gameplay tool, informing you of danger. But The Last of Us 2 also knocks back stealth with the introduction of a new enemy: dogs. In fact, for all the new obstacles it throws in your path — including the new zombies “Shamblers” that release a cloud of acid for area damage — guard dogs are the toughest to deal with, for they can trace your movements and lead others right to you. To lose them, you’ll need to craft a distraction or run far.

For those who have problems with combat in general, you’ll be glad to know The Last of Us 2 is more accessible with five difficulty options. It’s also more accessible for differently-abled players, including those hard of hearing or with low vision. Naughty Dog claims The Last of Us 2 is its most accessible game to date. That’s all the more important in a title that makes heavy use of dark and barely-lit indoors. It — along with the emptiness that is a byproduct of a post-apocalyptic world — is light on the PS4’s aging graphics rendering engine though, which can instead focus on the details in the faces, crucial for the audience to connect and relate with the characters. 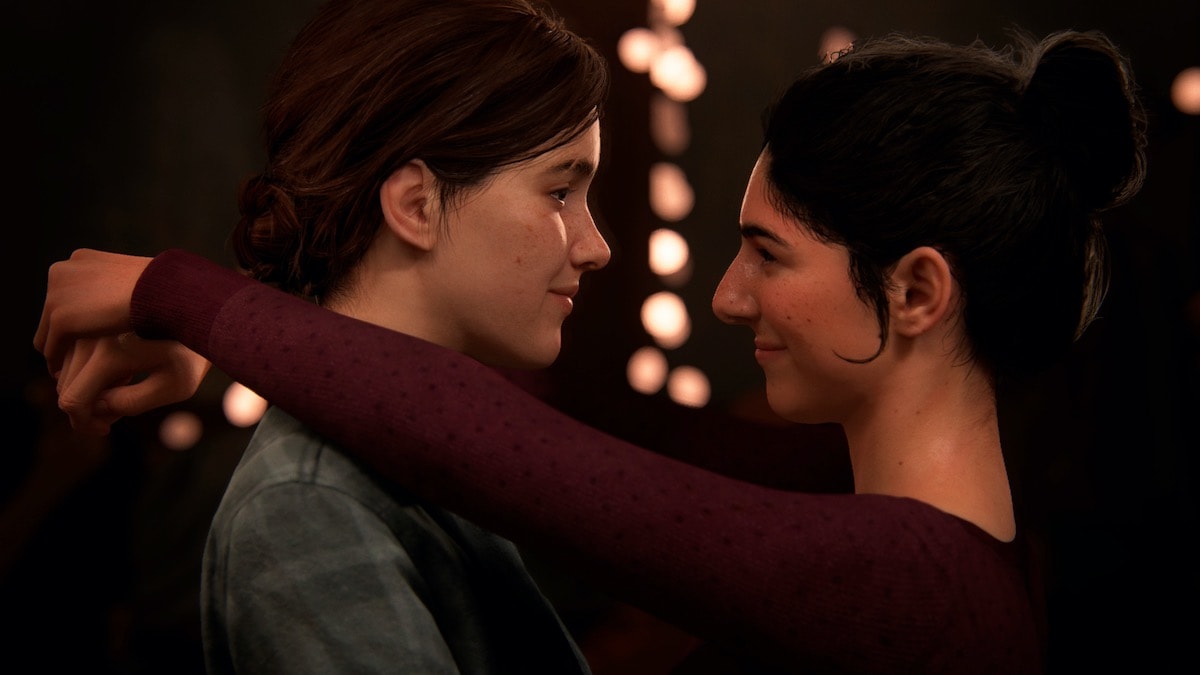 Ellie and Dina in The Last of Us 2
Photo Credit: Naughty Dog/Sony

If you keep your eyes peeled amidst the dark interiors, you might spot a PS Vita and PS3 among the many Easter eggs. Though The Last of Us 2 is set in 2038, its world remains frozen in 2013 when the pandemic struck, before the arrival of PS4. But as the PS4 prepares to exit the center stage in the real world, The Last of Us 2 is a fitting swansong for the best-selling console that dwarfed its primary competition during the console generation of the 2010s. It will likely boost sales of the PS5 too, given Sony has yet to promise an equivalent of Xbox’s Smart Delivery. And largely for good reason, if you can look past the financial motives at heart here.

Shortly after the release of The Last of Us, Druckmann said he’d be open to a sequel if they could deliver something on the level of The Godfather Part II. That inspiration has clearly carried through, right to the name: The Last of Us Part II. But despite the adulation and accolades showered on the original, it was no Godfather. The padding required of video games, inherent within the concepts of level design, gets in the way of pacing. Still, The Last of Us 2 delivers where it counts. It’s oppressing, it’s brutal, and it’s a sucker punch, by way of the positions it puts you in to drive home what a change of perspective can do. As it’s said, every villain is the hero of their own story — and vice versa.

The Most Exciting PC News of 2020 for Gamers, Enthusiasts, and Working from Home

Redmi Note 8 Pro will get a new special edition soon, Xiaomi announced on Saturday. The company revealed on Twitter that a new edition...
Read more

Realme X Up for Pre Order in India

Realme X is set to launch in Indian on July fifteen, and currently, the corporate has proclaimed that the phone is going to be...
Read more

Call of Duty: Mobile Gold Rush Event for Season 6 Is...