Google Meet, the video conferencing service by Google, is rolling out a new feature that automatically removes background noise during a video call. The AI-powered noise cancellation feature was first announced back in April and it is now reaching its Web client first, and will later come to Android and iOS devices. The feature, however, is said to be pushed out in a phased manner to select G Suite customers. Google Meet in the last two months has announced several updates as the platform is witnessing a massive growth in its userbase owing to the coronavirus pandemic.

Back in April when Google first announced the noise cancellation feature on Google Meet, the company had said that the update will help users limit interruptions during a Google Meet call. The AI-powered feature intelligently filters out background distractions such as dog barking, pen-clicking, and more. It was also added that the noise cancellation on Google Meet will be first rolled out to G Suite Enterprise and G Suite Enterprise for Education customers.

A report by VentureBeat claims that the AI noise cancellation feature is getting added to the Web version of Google Meet and it remains on by default. Users can check the availability by going to the settings and see if “Noise cancellation” appears under the Audio setting. 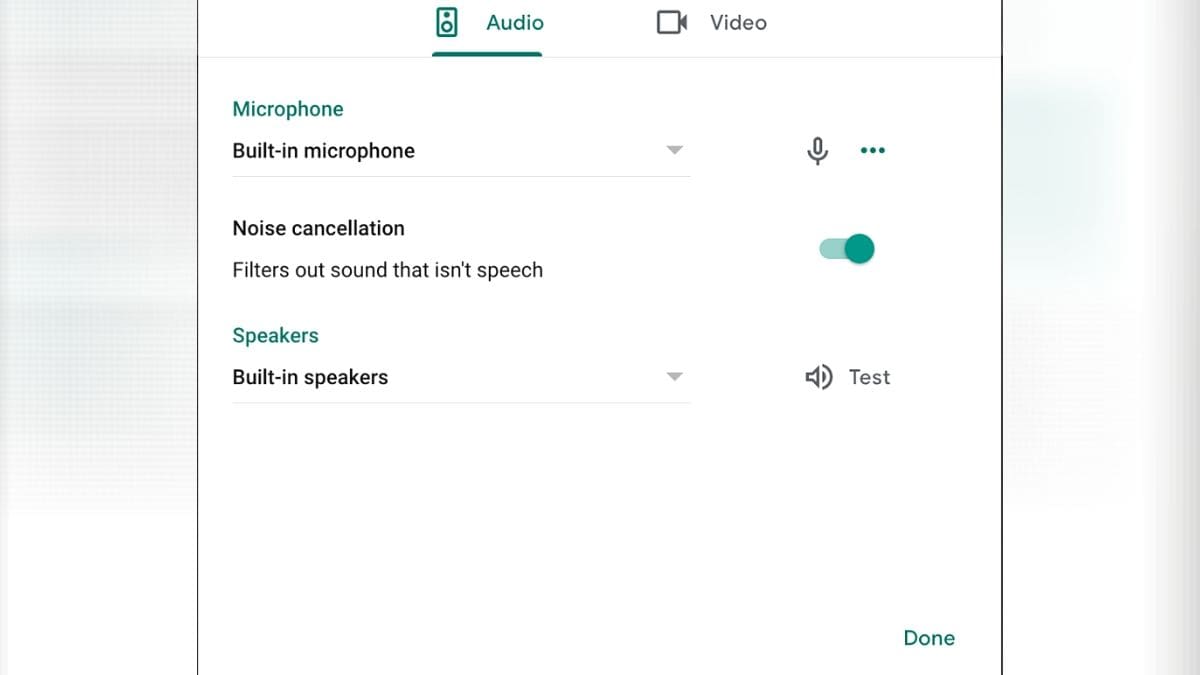 How does the Noise cancellation on Google Meet work?

Speaking about the noise cancellation feature, G Suite’s Director of Product Management Serge Lachapelle told Venture Beat that similar to speech recognition, which requires figuring out what is speech, this feature relied on machine learning to understand what constitutes as noise and a speech.

Lachapelle further told the publication that the algorithm was trained using a mixed data set featuring noise and clean speech. The feature is also demonstrated in a demo video by the Google executive.

When asked about the privacy concerns of Google Meet’s noise cancellation feature, Lachapelle said that the data was sent and received by Google Meet through a secure service called borg, and this data was not accessible by anyone to ensure privacy, confidentiality, and safety. He further stated that Google would be improving the feature over time, but not directly using external meetings.

Google in April had also announced another AI feature that is said to improve the video quality even in “in sub-optimal lighting conditions.” Google Meet in May was made free to everyone with a Google account and not just for enterprise and education customers that propelled the video conferencing service past 50 million downloads on Google Play.

The Google Meet shortcut was also integrated into Gmail. The regular updates are a result of growing traffic amid the coronavirus pandemic and the company takes on rivals such as Zoom.

Infinix Smart 4 to Go on Sale in India for First Time Today via Flipkart: Price, Specifications

Hey what is up guys Rohit here, this is the pixel 4. This is one of the phones I was looking forward to the...
Read more

Realme X Up for Pre Order in India

Realme X is set to launch in Indian on July fifteen, and currently, the corporate has proclaimed that the phone is going to be...
Read more