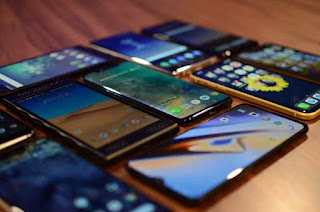 Motorola is expected to launch a new smartphone called Motorola One Hyper this month. This will be the first pop-up selfie camera phone from the company.

Leaks say this phone will feature a dual rear camera setup, and the primary camera will include a 64-megapixel sensor like Realme XT, Realme XT 730G and Redmi Note 8 Pro.

This smartphone will sport with the 6.39-inch IPS LCD, and it maybe comes with Android 10. It’ll be powered by Qualcomm Snapdragon 675 chipset, paired with 4GB of Ram with 128GB of storage.

Xiaomi is ready to launch, one of the best smartphones form the company Xiaomi Mi CC9 Pro. This flagship device has been teasing with the Penta camera setup, and the camera is the highlight of this phone.

This smartphone may feature a 5x optical zoom and 50x digital zoom.

This phone will be powered by Qualcomm Snapdragon 730G chipset. This device carries a 5,260mAh battery capacity that supports 30W fast charging.

Realme launched its first flagship smartphone in the European market called Realme X2 Pro. This flagship is expected to launch in India this month on 20th November and this will compete with Redmi K20 Pro in the segment.

This phone already launched in China at CNY 2,799 (around Rs 28,000) for the base variants. It’ll sport with a 6.5-inch FHD+ Fluid AMOLED display, and powered by Qualcomm Snapdragon 855+, 7+nm technology-based Octo-Core processor.

Paired up to 12GB of Ram and up to 256GB of UFS 3.0 based Storage. This phone comes with a quad rear camera setup and the primary camera includes a 64-megapixel camera sensor and a front camera comes with a 16-megapixel sensor.

This device comes with a 4,000mAh battery capacity that’s supported with Super VOOC fast charger and its runs on ColorOS, based on Android 9 Pie.

The company is expected to launch Realme 5s or 5i, 5s already has received BIS certification and this may come in India as Realme 5i this month.

This may feature with a quad-camera rear setup similar to Realme 5, and it may cheaper than Realme 5. However we don’t have much information about it, stay with us for more information.

This month we are expected to see a new smartphone from the Huawei company. Honor V30 and V30 Pro may launch this month and it’ll be powered by latest Kirin 990 chipset, that includes 5G variant also.

Leaks show this phone will be featured with a 60-megapixel primary camera sensor with the punch-hole display. Honor V30 series set to launch in China on 6th November

This device will run on Android but we are not sure about its future updates and Google services.

Leaks show this device is similar to the current Redmi Note 8 series. Xiaomi was the first company to launch a smartphone with MediaTek Helio G90 and G90T processor in India and it may also first comes with Snapdragon 730G chipset as well in India.

Most awaited smartphone since Poco F1 launched, Poco F1 was the most successful smartphone for the company, F1 offered Qualcomm Snapdragon 845 chipset under Rs 20,000 ($282) it was most affordable phone offers SD 845.

Already 1 year past, and we are expected to see Poco F2 launch this month. It is expected to huge upgrade with the AMOLED display and triple rear camera setup and powered by Qualcomm Snapdragon 855 chipset.

It’ll runs on custom ROM MIUI 10 based on Android 10. This could be the most affordable smartphone that will offer Snapdragon 855 at the cheapest price.

Still, we don’t have much more information, but we’ll inform you as we get more details about it.

And there are many more smartphones are coming like Moto Razr, Mi A3 Pro, OPPO Reno S, Honor 9x and many more.

For more information stay with us.

An ordinance to "ban online gaming" involving betting, has been promulgated by the Tamil Nadu government in the backdrop of suicides by gamers who...
Read more

Hi there this is Rohit and in this article, we talk about Realme 6 and I'm actually excited about this device yes finally we...
Read more

Logitech has reported a 13.6 percent rise in quarterly sales on Tuesday as more people used its computer products while working from home due...
Read more

Huawei’s has filed for trademark for another OS – Harmony