A lot of smartphones launching this September. It’s the month for new phones like the iPhone, Samsung and many more are coming. Mid-year September is very important for most companies, launching different devices at mid-range to flagship devices. A company like Nokia, Vivo, Apple, Samsung, Realme, OnePlus, Asus, Honor, Xiaomi are lined up for launches in September. 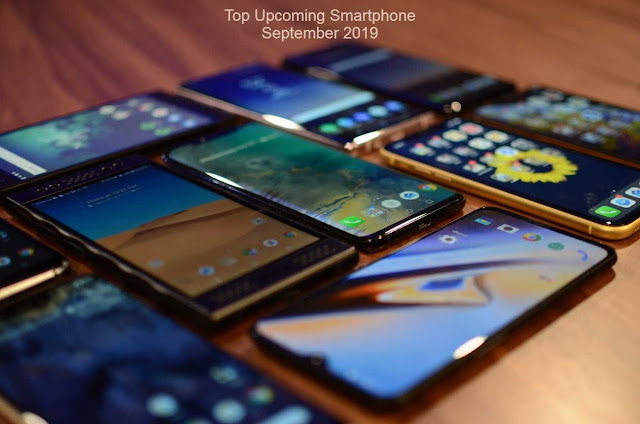 HMD Global unveils multiple smartphones at the IFA 2019 on September 5. The company is expected to unveil the second generation of Nokia 6.2, Nokia 7.2, Nokia 8.2. These smartphones are rumored to become with the water drop display and triple rear camera setup. Nokia 7.2 is expected that have sport circular camera module features 48MP primary sensors along with the 120-degree wide-angle lens, we will three color options like Ice Blue, Forst Green, and the Charcoal Black.

Vivo has unveiled an upcoming new Z series smartphone in September. Vivo Z1 Pro was the best selling for the company and it was the first Z series smartphone in the country and the company now planned to launch its Z1 Pro successor another budget smartphone. Rumors to Z1 Pro will get an upgraded version called Vivo Z1x or Vivo Z2 Pro. And this phone will be the successor of Vivo Z1 Pro.

Meanwhile, the name remains unconfirmed from the company. But surely Vivo is working on a new Z series smartphone this September. New Vivo phone may probably be launched the first or second week of September.

At the current Vivo Z1 Pro is giving very competitive in the market with the Redmi Note 7 Pro, Realme 3 Pro and Realme 5 Pro. Vivo Z1 Pro may come with an improved 48MP Samsung primary sensor. Vivo Z2 Pro has a triple rear camera setup similar to Vivo Z1 pro with better photos and has an 8MP wide-angle with the 2MP depth sensor. And front camera of Vivo Z2 Pro will come with a 32MP selfie camera like Z1 Pro has.

iPhone 11 series comes with a square shape camera module at the back. The new leak reveals that some of the upcoming iPhone will include the third lens could be an ultra-wide-angle lens. Apple also working on AI software for better image processing capabilities and improved low-light photos. These new three iPhones will come offers water protection technology which will help iPhone users in the rain conditions for longer durations.

Samsung Galaxy M30s will comes at the mid-range price and will bring some amazing features. It has a 6.4-inch FHD+ Super AMOLED display and it has a brand new Exynos Octo-Core processor, that can process high-end performance. M30s have a triple rear camera setup for better photo capture with a more detailed and front camera that also comes with the high-resolution lens. Considering the battery backups, it has a huge 6,000mAh battery that can easily last for 2 days’ normal usage. It comes with USB-C Type fast charging supports. Overall this phone is beast with the amazing specification. Launch date confirmed September 18.

Samsung Galaxy Fold is a foldable flagship device that comes with the dual-display in the market first time. This device is similar to a book in which foldable doubles display space results in large display sizes. With the Snapdragon 855, this is a very good configuration. Good battery backup with 4380mAh fast charging. The rear camera comes with a 12+12+16MP setup and the front camera comes with an 8+10MP combination. Display a 7.3-inch dynamic AMOLED. Overall very good device coming back again in September.

OnePlus smartphone leaks are out. The company may launch its first 64MP camera sensor with OnePlus 7T Pro. Live images are already out there, and this smartphone could be powered by a new Qualcomm Snapdragon 855+ chipset. OnePlus 7T series is being rumored to be launch on September 26 in India.

OnePlus definitely working with the latest 64MP camera sensor, but not sure when it’ll be launch. OnePlus company will also be unveiling its first SmartTV in the Indian market in September. OnePlus will be available on Amazon and OnePlus stores.

Huawei’s upcoming flagship will come with next-gen 7nm Kirin 990 chipset to be unveiled at the IFA Berlin on September 6. Rumors, Mate 30 Pro will have a 6.7-inch Quad HD+ AMOLED display with a wide notch. It will have advanced 3D facial recognition technology. And the Mate 30 & Mate 30 Pro will sport different camera sensors. Mate 30 Pro will be packaged with two 40MP camera sensor on the back in a circular-shaped, and Mate 30 may have only one.

Mate 30 probably will come with triple camera setup and Mate 30 Pro will come with the quad-camera setup. And next-gen Kirin 990 SoC will power the Huawei and Honor flagship in the future. Mate 30 series will run on the Android 9 Pie powered and EMUI software system. Mate 30 has a 4,200mAh battery and Mate 30 Pro has a 4,500mAh battery and supports 25W fast wireless charging with additional 55W wired charging.

Both smartphones come with notch-less OLED display with no notch. Both smartphone sport a pop-camera, with a 16MP selfie camera. Both devices featured the same 4,000mAh battery and support fast charging. Honor 9X is expected to launch around Rs 15,000 ($207) and Honor 9X Pro price still no disclosed.

RoG Phone 2 is the second gaming Smartphone from Asus. This phone runs on a Qualcomm Snapdragon 855+ based on the 7nm processor. Paired with 8GB RAM and 128GB of storage variant. Runs on Android 9 Pie with custom ROG skin. This phone has stereo speakers both sides of a 6.59-inch FHD+ AMOLED display, with a 120Hz refresh rate. ROG Phone 2 is featured with dual rear camera 48+13MP sensors, and the front camera has a 24MP camera. Talking about battery it has a massive 6,000mAh Hyper Quick charging USB Type-C. This smartphone is expected to launch this September, price likely to around 35,000 ($484) to 40,000 ($554).

PUBG Mobile Season 14 trailer has been leaked as per a report — just ahead of the new season which is expected soon. A...
Read more